War games never had much of a place at Mennonite summer camp.

So when Dave Erb played a “capture the flag” game at Silver Lake Mennonite Camp 20 years ago, campers imagined themselves to be Menno Simons, founder of the pacifist church that bears his name, fleeing persecution during the 16th century.

“We used to play in the bush all the time,” Erb said during a recent interview at the camp near Sauble Beach. 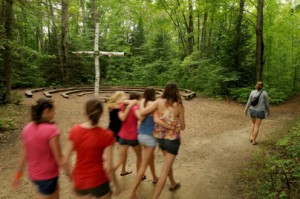 A group of campers walks past a cross made of birch on their way to an afternoon swim.

As they scampered through the woods they laid waste to some of God’s green Earth. Hours of mayhem turned the forest floor into a bare surface.

But as people became more conscious about protecting the environment, the forest was made off-limits to young campers. A rope marked off the sensitive areas for several years.

Now a carpet of ferns and leafy bushes blankets the base of countless maple, birch, cherry and ash trees. The rope has been removed, but campers must still keep their feet on well-marked trails.

It’s one of the subtle ways campers learn to respect nature, said Erb, a Waterloo resident and the camp’s executive director.

“Camp has always been the place for kids to reconnect with nature,” he said. “Now, we’re more intentional.”

Staff and counsellors recently led some sessions for 13 to 16-year-old campers that were designed to be fun but also raise awareness of good environmental stewardship. 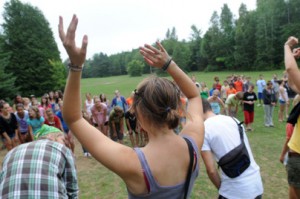 One group huddled around a big steel bowl heaped with locally-grown ingredients to make a granola snack.

“I didn’t think it would be this easy,” said Reka Rossignol, 13, of Toronto. “It’s really easy and fun.”

She said making granola from scratch is a good alternative to buying bars wrapped in foil and shipped in boxes. And using local ingredients, such as grains from a nearby organic farmer, is better than using ingredients shipped from long distances, she said.

Another group of campers spent time in a small garden learning how to condition the soil. (Although pulling weeds under the blazing sun seemed to be building a love-hate relationship with nature.)

And another group, some shouldering guitars instead of garden tools, applied their talents to writing a new camp song based on a theme of environmental stewardship.

A copy of the Green Bible, which includes Scripture verses on stewardship printed in green ink, was on a bench beside Darren Kropf, creation care program co-ordinator for Kitchener-based Mennonite Central Committee Ontario.

Kropf said it’s important to involve teenagers in caring for the environment because they have creative energy that adults often don’t.

Also, it can be daunting for young people to try launching environmentally-friendly projects in their congregations because sometimes people resist new ideas and change, he said.

But summer camp is a safe place for young people to try new ideas, he said.

And the more young members of the church who live in tune with nature, “the more hope we have for the future,” Kropf added.

While the theme of environmental stewardship ran through some of the programs, those time-honoured summer camp activities — swimming, canoeing and dozens of games — remained at the forefront.

The rhythm of the day was frequently punctuated with peals of laughter — even while they pulled clumps of weeds from the garden.

“There’s no reason why environmentalism can’t be fun,” Kropf said.

Click on an image below to view in more detail. 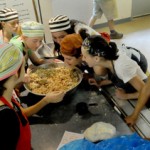 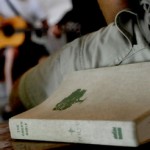 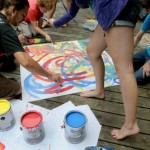