What a great weekend! The weather was perfect, lots of snow and moderate temperatures – perfect for getting outside!

Highlights from the Kids Perspective: Owl Prowl (we actually called in an owl!), skating on the lake, mini sticks in the dining hall, snowshoeing and cross-country skiing

Highlights from the Fathers Perspective: Saturday morning Globe and Mail (Silver Lake staff provided programming for the kids), skating on the lake, cross-country skiing and watching hockey night in Canada on the big screen in the dining hall. 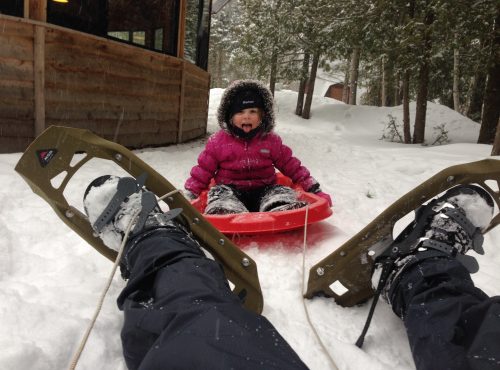 The following article was written by Clare Schellenberg who has been on staff at Silver Lake for 5 years and is a student at Canadian Mennonite University in Winnipeg where she’s majoring in Peace and Conflict Studies and Theological Studies.  A shorter version of this article is printed in the Fall Edition of the Woodbox Newsletter. 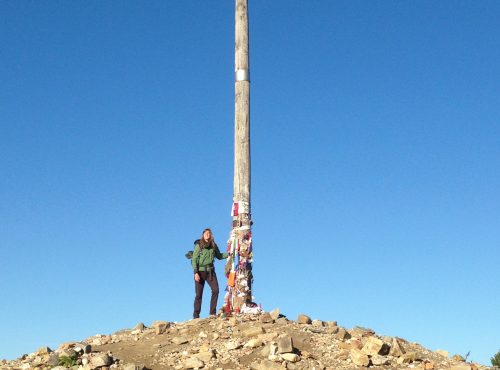 My fascination with the Camino de Santiago began last summer while watching the movie called ‘The Way’ with my mother. Before watching this movie I had never heard of the Camino, nor ever thought about the idea of pilgrimage. But about half way through I blurted out, “Mom, I’m going to do this” and she smiled, knowing that I had offered many ‘brilliant’ dreams before – but inside I knew that this was something that would in fact happen.

The image of ‘the Way’ and the ideas of ‘process’ and ‘destination’ intrigued me. Doing something that pushed me holistically – physically, mentally, spiritually and emotionally excited me. I began reading books on the background of Christian pilgrimage. With the help my of my faculty advisor I created an independent study so that I could delve deeper. Still the questions sat in the back of my mind: why would someone walk over 800 kms, and more importantly, why would they choose to do so? At one level it made no sense, but another part of me knew that it did. And so I resolved to walk the Camino de Santiago – alone – and open myself to what it could teach me.

I filled my backpack with 20 pounds of clothing, a sleeping bag, my water, every imaginable blister medication possible, my journal and a whole lot of fears and questions about why I was going to walk across northern Spain. On April 28th, at 6:00 am, I began walking from the small French village of St. Jean Pied du Port. A mere 5 km later, early in the Pyrenees’ mountains, my first blister appeared, and a sharp ache in my back began to pulse. I tried to mimic the stride of the Hungarian man in front of me, and eventually developed a rhythm with my walking poles, but still felt like I was doing everything wrong. At that point I knew no more than to follow the arrows and shells marked along the path and to put one foot in front of the other. On that first day the fear of walking for 33 days straight with an average of 25 to 30 kms every day alongside people from all over the world whom I did not know seemed daunting.

As the days passed, and my achy feet began to adjust, my appreciation for walking began to emerge – particularly walking alone. I would get up early and often be walking by myself before the sun rose, but slowly I realized that walking alone was impossible. Sure I was on my own path, but we pilgrims were always together. We were all simply walking, each with our own story and our own reason for being there, and each falling in step with others on this journey. A deep interconnectedness with complete strangers emerged. There were no labels or judgments – often not even names. Sometimes, I would know only from which country they came and the injuries they may have encountered that day. But beneath all of that we found ourselves sharing out of our deepest selves. This hit me early on while walking a few days with Dan, a US marine who had just finished a tour of duty, fighting in Afghanistan. As a peace and conflict
studies major, I was initially nervous about walking alongside someone whose worldview and experience was so very different than mine. What amazed me was that I came to know far more about Dan’s deep commitments, his families, his questions, his summer plans – than his life fighting in Afghanistan. We came together as two pilgrims, embracing each other – each walking the same path together.

At about week two my body adjusted to the physical realities of the Camino – and the experience became far more than simply walking. I began to realize that while my 20 pound pack was full of my ‘stuff’ – it was really being filled with experience, humanity and sacredness. As I sat, walked, cooked and ate meals with pilgrims from around the world, I listened and took into myself their stories. I breathed in stories of deep grieving, of deep searching and questioning,
and of deep discovery. I learned very quickly the impossibility of boxing or labeling any of the people I met. I learned that so many were searching – but none were lost. I was graced with pilgrims who entered my life. From Dan, the marine fighting in Afghanistan; to Mary, a Hungarian woman who, at 72, was paralyzed from the knees down and walked nonetheless; to Judith, an Australian mother whose son had recently committed suicide after the death of his twin
daughters; to Ben, a 17 year old boy whose mother forced him to walk the Camino after getting his girlfriend pregnant; to Veronica, a 78 year old Irish woman with over 40 grandchildren; to Richard, a Canadian albergue (hotel) owner who walked the Camino last year and committed himself to hosting pilgrims from that time on in a small town in Spain; to Sue, a Canadian Camino author who has walked the Camino 11 times, each time walking it in her bare feet. The list goes on.

Each of us held and carried our own narrative – our own motive for walking. On ‘the way’ I saw many of these pilgrims holding a stone and dropping it off along the path. I asked a friend what these pilgrims were doing and she explained that many chose to pick up a stone and grieve with it, pouring all of their sorrow into it, and when they were ready they dropped it off. As other pilgrims would walk, they were then invited to pick up one of these stones and continue
the process. I did this as well, however I soon realized it wasn’t only my own sorrow that I was pouring into these rocks, it was the sorrow of my fellow pilgrims that I had begun to carry in my backpack. Their experiences and the radical hospitality I experienced in sharing our stories, in sleeping in albergues and being cared for by monks and nuns in monasteries was transforming for me. Shared stories and experiences of pain, of humanity, of hope and of grace were simply overwhelming.

As I walked I realized that although I was physically stronger it was the emotional, spiritual, relational truths of these people and their stories that filled and overflowed my backpack. So often, I think this is the case for all of us. Like me, I think many of us tend to pack and carry and walk our lives so that we can control things around us so that we can deal with our insecurities and fears and with our own needs and aspirations. But, the Camino taught me in a profound way the power of surrendering control and opening myself to what I cannot control. I could never control how far I might be able to walk that day, whether an injury would arise, who I would meet or what story I would encounter, where I would eat or stay for night – and much more. Learning to be present and open – absent my control – to glimpses of God at work in the people I met, and the shared experiences we had, was a gift for me. Walking the Camino opened me again to learning trust in God and to leaving room for God – and in doing so my overflowing backpack felt lighter and lighter.

The paths of the Camino opened much more than dust, pain, blisters and conversation: it opened an ancient story in which I became one unique part – and through which I developed openness for God’s presence walking with me. Indeed, the goal of reaching a specific ‘holy’ destination – in my case the cathedral in Santiago de Compostela – signifies not the end of the journey, but rather the start – a portal into a renewed way of being, of seeing life afresh with spiritually cleansed eyes. I learned that the Way commanded by Christ is one to be journeyed – indeed “the way” is made by walking.